Show me the people who Visited Site -> Signed Up For Trial -> Upgraded in the last month.

Funnels are located among your account’s reports. Or, jump into creating a new funnel by following this link.

At the top of each funnel, you can name the report to refer to it in the future. You can also set the date range to report on. You can pick from a set of convenient pre-built date ranges, or you can customize your own date range with the date picker.

At a basic level, the Funnel Report is made up of "Steps" toward some goal, whether that goal be a purchase, a subscription or just signing up for a newsletter. These steps can be made up of events ("User visited signup page at least once") or property values ("User received Plan Type = 'Professional' at least once"). 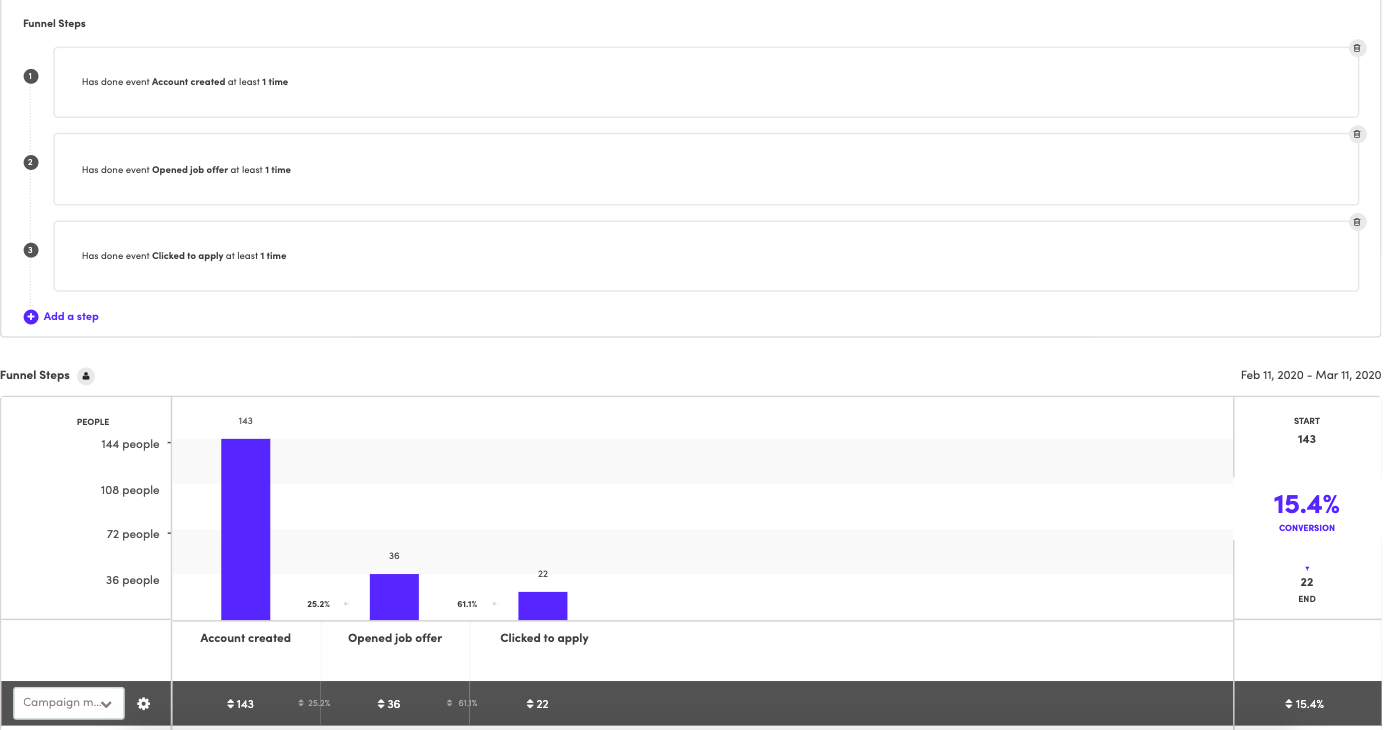 As mentioned above, you can also include property value steps, as well as steps looking for users who did not do some action:

In all of these screenshots, you may have noticed the numbers along the left side of the configuration window. If you placed a step out of order, or simply want to reorganize the steps, you can click on one of these numbers and drag them up and down the configuration window. If I wanted to put the "Opened job offer" in the middle of the funnel, I would simply click on the black Step 3 bubble, drag it up to where the Step 2 bubble is, then release.

Of course, sometimes users have different ideas than you about how they'd like to move around your site. They don't always follow the funnel the way you expect, especially if you're running some more exploratory funnels. Here, I've set up something of an unorthodox report:

I'm looking for users who first clicked to apply for a job offer, then signed up, then visited my site. As you might expect, people aren't getting very far in this funnel. If I would like to see how this compares to the traffic outside the funnel, I can click the icon in the upper left that looks like a person:

Now, the grey bars show you the difference between the users in the funnel and the users outside the funnel. 0 people visited a site after signing up, while 43 459 people total have visited the website.

If you want to switch back to the original view, simply click the same icon again.

If you would like to create more complex reports, there are some options - such as attaching a property to an event step, or nesting multiple events in the same step - to help you build exactly the funnel you need.

Attach a Property to a Step

There are times when it's not enough to specify that a user simply did an event, such as playing a video - sometimes, you want to find users who watched a specific video. When editing a step, you'll see a button with an arrow near the right end of the edit box:

Here, I've specified that I'm looking specifically for users who were brought to site by organic traffic.

"Or" - Multiple Branches for the Same Step

If you want to see all of the users who took different path to the same objective, you can create branching paths by nesting steps with the "Or" option. To start with, select the step you would like to branch and click the "branch" icon on the right side of the edit bar:

(At this point, additional branches can be created with the plus button on the right side of the edit bar)

When you run the report, both of the events will be combined into a single step. The number you see is the total number of people who completed that step by doing either of the given events. You can drill down and see that number broken down by the different branches by clicking the "Show more conditions" button along the bottom of the graph. When you click one of the branches, the report will re-run and reformat the data. After that, the bar will show you the difference between the selected branch and the total:

"And" - Require Multiple Events for the Same Step

On the other side of the coin, you can require multiple events for the same step (instead of branching them out) by selecting "And" instead of "Or" with the branch drop-down.

To get through that step, users will have to complete both of the events in the step (in any order). Users will be considered "done" with that step at the time they finish both events - in other words, the timestamp of the second event completed.

Segment Your Funnel with Properties

Below the events in the funnel, you can select any of your Kissmetrics properties to segment your funnel even further.

Once a segment has been selected for your report, you will see a gear icon next to the segmentat drop-down. Clicking this icon will reveal the advanced settings window, which contains three different settings that can help you fine-tune your report:

The first option in the Advanced Settings window has to do with slicing up attribution. Do you want to see the first campaign your users clicked to come to your site? Perhaps whether most of your purchases come from new or returning users? This option lets you specify where you want us to slice and select property values.

First Ever means we will show the first value a user recorded for that property, even if that value was recorded before the start of the funnel.

Last Ever will show the last value a user recorded for that property, even if that value was recorded after the end of the funnel.

Identifying how many people in a funnel are now on a "premium" plan.

First In Date Range will show the first value recorded within the date range of the report. (If the date range is "Any Time," this is equivalent to "First Ever")

Ggauging whether a retargeting campaign is effectively drawing users back to your site.

At Time Of Step X

You have the option of slicing attribution at the time of a given step in your report (Step 1, 2, 3...). For each user, the report will look at the timestamp when they completed a given step and look back from there, finding the most recent value for the given property - whether that value was recorded at the exact same time as that step or a month before.

Identifying the last ad campaign your users clicked on before making a purchase.

None is the data exactly as Kissmetrics receives it; no changing of capitalization or interpreting the data type. "What you record is what you get."

Kissmetrics converts everything to lower-case text.

Kissmetrics shows the full URL for referrer, campaign source, and any other URL-based properties.

Preserving exact data and being able to click directly on links to see the source page.

This optioin displays the full URL, as the above property, without the query string. If some of the URLs have query strings - for instance, for campaign information - that part of the URL will be hidden, and users will be grouped based on the rest of the URL.

URL - Domain Only groups together all of the referrer URLs from the same domain, allowing you to see all of the users from, for example, Facebook or Twitter under a single bucket.

Consolidating all Facebook/Twitter/search results referrers, or any other sets of referrers that share a common domain.

URL - Path Only displays everything after the domain section of the URL, with the domain cut off. This won't usually affect the way users are grouped into various buckets - it will mostly make it easier to read the URLs recorded by our Page View event.

Identifying which page a user was on when they submitted your Newsletter Signup form.

Conversion Rate from Previous vs from First

This setting will also affect the conversion rates shown in the segmentation table below the report.

Updated about 2 years ago